Potent run production, with contributions up and down the lineup?  Check.

Resilience after falling behind by multiple runs early in the game?  Check.

A nailbiter of a Save from Brad Lidge?  Check.

Now this was more like the Phillies of the past few seasons.

The Marlins jumped to an early 4-0 lead on a solo shot from Gaby Sanchez in the first, a Ronnie Paulino double in the second, and a two run homer from Hanley Ramirez in the third.  Unlike the previous few weeks, however, the Phillies quickly answered back in the bottom of the third, with a long two run opposite field bomb from Ryan Howard and an RBI single from Raul Ibanez, who was 4-for-5 on the evening.

The scoring bounced back and forth throughout the game, with the Phillies taking their first lead of the night on a sacrifice fly by Chase Utley in the sixth inning.  The Phillies and Marlins both got poor games from their starters, with the Phillies knocking around the Marlins' Chris Volstad to the tune of eight hits and five earned runs over four innings.  Kendrick surrendered five runs over five innings.

Take note: This was not a cleanly played game.  Although only two errors appeared in the box score (one from Ryan Howard, the other from Kendrick), right fielder Ben Francisco, filling in for the struggling Jayson Werth, misplayed a couple of balls in the field, including one in the top of the eighth inning that allowed the go-ahead run to score on a triple to friggin'  Wes Helms.

Francisco, who also grounded into two double plays early in the game, was in line to be the goat, until the bottom of the eighth.  With two outs and runners on second and third, Francisco singled to center field, driving in Placido Polanco and Utley to put the Phillies up for good.

Lidge, as is his custom, loaded the bases in the ninth, but escaped doom when he coaxed a sky-high pop-up from Paulino to end the game.

This was awfully nice to see, especially going into a Roy Halladay start tomorrow. 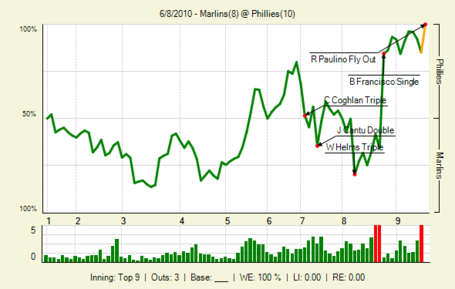