Share All sharing options for: The Blueprint: Pirates 3, Phillies 2

OK terrific.  I'm fearful that we have a long summer of this kind of stuff ahead of us.

Cole Hamels gave the Phillies a solid if somewhat inside-out pitching performance tonight, struggling with command and enduring a lot of long at-bats as the Pirates' hitters fouled off fastball after fastball, scoring three runs in the first four innings.  Hamels took command starting in the fifth, however, but was only able to complete seven innings due to early pitch count problems.  Abandoning his early mostly-fastballs approach, the offspeed repertoire Hamels adopted later kept the Pirates' hitters off-balance.

But it was too little too late, as the Phillies offense was once again held in check by another scrub pitcher -- Daniel McCutchen, he of the 11.00 ERA entering the night.  After completing five and a third innings and allowing just two runs, one earned (a Wilson Valdez home run, of course), the Pirates bullpen locked down the narrow lead, allowing just two hits and a walk in 3 2/3 innings as the Pirates held on to win 3-2, despite being outhit by the Phillies, seven to five.

And what would a Phillies game be without another injury?  This time it was catcher Brian Schneider, who took a foul tip off his glove hand and suffering a hyperextended left thumb.  So now we're down to our third and fourth string catchers.  Huzzah!

And how apropos that shortly after losing their second baseman and third baseman, each of their replacements commits an error?

Yuck.  At least now I'm remembering what it's like to blog about a disappointing team. 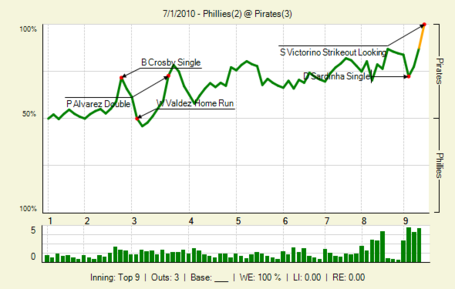