Share All sharing options for: Never Trust Anyone Over 35: Cubs 12, Phillies 6

Phillies' starter Jamie Moyer had one of "those nights".  And so did quickly-regressing reliever Jose Contreras.  We're really in uncharted territory with Moer, so I guess we can't really be surprised when he throws a clunker (even against the miserable Cubs).

After Ryan Howard gave the Phillies a quick 2-0 lead on a titanic home run in the top of the first, Moyer allowed six Cubs runs in three innings pitched, surrendering five hits and two long home runs to Derrek Lee and Alfonso Soriano -- and also hitting two batters in the first inning, both of whom scored on an Aramis Ramirez double.  Even the Cubs' outs were hit hard.

The Phillies bullpen held things together for the next three innings, with David Herndon, Kyle Kendrick, and Chad Durbin keeping more Cubs runs off the scoreboard.  Unfortunately, the Phillies didn't exactly close the gap in the meantime.  Then Jose Contreras came in and, well, the linescore kind of tells the story: .2 IP, 5 H, 5 R.  All with two outs, after a magnificent double play turned by Jimmy Rollins, who had a few truly outstanding defensive plays on the night.

Fellow Cuban Danys Baez didn't do much better, allowing four hits and a run and recording just three outs in the 7th and 8th innings.

Then, down 12-2 in the ninth, the Phillies batters started a little "rally" that might have meant something if the pitching staff hadn't been an utter Pukefest all night: After back-to-back two out RBI singles from Shane Victorino and Raul Ibanez, the big man Ryan Howard hit his second homer of the night to make the score 12-6.  Jayson Werth, 0-for-4 on the night, then popped out to end the game.

Why even talk about Ryan Dempster, who was fine tonight (6.2 IP, 2 R, 9 Ks) but really, an ape could have pitched and won this game for the Cubs.

At least the Phillies can still hit, when the other team's pitchers are just grooving the ball over the plate. 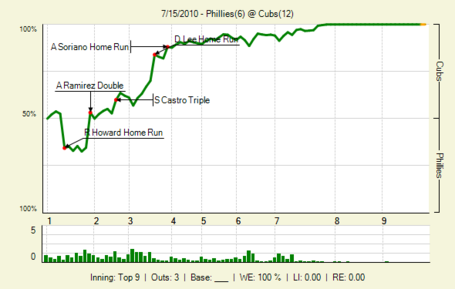