It's been just five days since the Phillies finished a first-half sweep of the NL Central leading Reds that seemed to hint at good things to come in the second half, but between the subsequent all-star break and two very different but similarly dispiriting losses to the Cubs in Chicago, it feels like a lot longer. Less than a day after Jamie Moyer and Jose Contreras got elder-abused in a 12-6 blowout loss, the Phils fell again as their limp lineup managed just five base runners--on a hot day with the wind blowing out, no less--against Cubs starter Ted Lilly and two relievers in a come-from-ahead 4-3 loss.

In fact, the Phillies blew two leads. After Shane Victorino put them on the board with a solo home run in the fourth, starter Joe Blanton forced in the tying run by walking pitcher Lilly with the bases loaded in the fifth. An inning later, Ryan Howard hit his third homer in two games, a two-run shot that put the Phils up 3-1. But in the bottom of the inning, Blanton--whose season ERA from the sixth on has to be in double digits--surrendered a tying two-run shot to former Phil Marlon Byrd.

To be fair, Blanton escaped a jam in the seventh, striking out Kosuke Fukudome and Ryan Theriot to strand a runner on third. With the Phillies offense done for the day, however--the team went a collective 0 for 10 after Howard's homer--it was only a matter of time, and the time came with two outs on a full-count pitch in the Cubs eighth. Aramis Ramirez took a Ryan Madson offering over the wall in left, and after Carlos Marmol struck out Jayson Werth, Howard and Ben Francisco in the ninth--the 12th, 13th and 14th strikeouts recorded by Chicago pitchers on the day--the game was over. 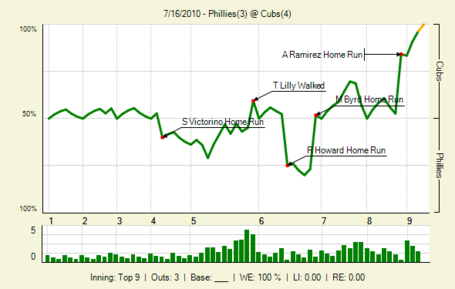