And we got off to such a nice start tonight, too.

The Phillies scored three runs in the first inning, but only one more the rest of the way, and Phillies starter Kyle Kendrick scuffled from the start.  Things didn't get completely out of control until the fifth inning, when the Cardinals lit the right-hander up for three home runs -- one each from Albert Pujols, Skip Schumaker, and rookie Allen Craig -- and the Cardinals took a 7-4 lead.  The Redbirds would tack on one more run in the sixth, on a home run by Randy Winn off Chad Durbin.  Yeah, that guy.

The Phillies out-hit the Cards 13-8, but were victimized by three double plays, and no home runs, and those are really good for helping a team score runs.

Cardinals starter Blake Hawksworth labored, but after the first kept the Phillies under control, in no small part by inducing 13 ground ball outs.

Don't worry I'm sure things will go much better against Carpenter, Wainwright, and Garcia... 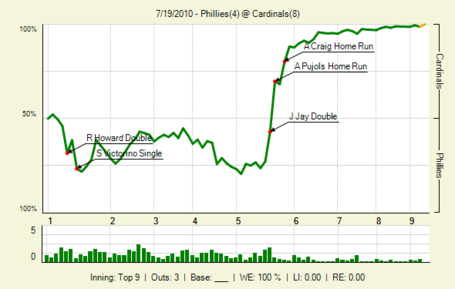