Not in the Manuel: Cardinals 5, Phillies 1

Share All sharing options for: Not in the Manuel: Cardinals 5, Phillies 1

The Win Expectancy chart at the bottom of this story suggests that the Cardinals seized control of this game in the bottom of the seventh, when Matt Holliday led off with a solo home run that broke a 1-1 tie and gave St. Louis a lead they wouldn't relinquish en route to their eighth straight win.

Really, though, the game turned about three minutes earlier, when Phillies manager Charlie Manuel made perhaps the single worst tactical decision of his career.

In the top of the seventh, Cardinals rookie Jaime Garcia was losing the strike zone and starting to tire. After retiring Ryan Howard to start the inning, he walked Jayson Werth, allowed a Jimmy Rollins single and, after striking out Cody Ransom, walked Carlos Ruiz to load the bases and bring up pitcher Joe Blanton. To that point, Blanton had worked six innings of one-run ball, and his pitch count was reasonable. But this was a game situation, a prime opportunity for a struggling offense against a starter who seemed on the ropes... and more to the point, Blanton's 2010 body of work in the seventh inning of his starts had been something out of an Adam Eaton nightmare: hitters had gone 15 for 31 against him with 5 home runs and a triple-slash line of .484/.500/1.032.

Four pitches later--the three swings and misses Blanton took against Garcia, for his third strikeout in as many at-bats, and the one Holliday took to drive a Blanton offering over the left field wall--the Phils were trailing. After three St. Louis relievers thwarted a mini-threat in the top of the eighth that ended with Werth extended his hitless streak with runners in scoring position to an unfathomable 26 at-bats, Blanton came back out for the eighth inning. A single, two-base error, and two-run double later, his night was over. The game was also effectively over, leaving only the question of whether the same could be said for this increasingly wretched Phillies season. 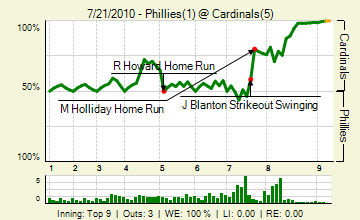