Consider it another entry in the "why they play the games" file: on a witheringly hot afternoon at Citizens Bank Ballpark, Ubaldo Jimenez, the National League's starter in the all-star game less than two weeks ago and Cy Young Award front-runner, was decisively outpitched by Kyle Kendrick of the Phillies--who, in the words of this guy, wasn't even supposed to be here today.  It will take a bit more time to fully gauge whether we're seeing the return of the offense to its pre-Slumpmas form--and if so, whether this was occasioned by the firing of hitting coach Milt Thompson, the probably inevitable return to form of Jimmy Rollins and Jayson Werth, or a bunch of smaller, not necessarily repeatable factors--like, today, the very hitter-friendly strike zone of home plate ump Derryl Cousins.

Certainly Jimenez would suggest that the last was a factor in sustaining only his second loss against fifteen wins this season: of the 68 pitches Jimenez threw in his two-plus innings, only 28 were called for strikes, and he walked six. After escaping a bases-loaded threat in the second by striking out Kendrick, he immediately got into trouble in the third: Jimmy Rollins singled and advanced to third on a steal and errant throw from catcher Chris Ianetta, then Placido Polanco and Raul Ibanez both worked walks to load the bases for Ryan Howard. The scorching slugger cleared then with a triple to the right-field corner, his fifth of the season. In the course of walking Werth, Jimenez fired a wild pitch that let Howard score; after his sixth walk, to Shane Victorino, his day was done. Greg Dobbs greeted Matt Belisle with a run-scoring single; after two outs, Rollins came up for the second time in the inning and hit the Phillies' second triple of the inning, stretching the lead to 7-0.

This turned out to be more than Kendrick needed. Granted a reprieve from the minors, Kendrick did what he always does when he's effective: not beat himself and generate groundball outs. All he allowed was a solo home run to Ian Stewart in the course of seven strong innings. Raul Ibanez, coming off his three-hit performance Friday night, hit a two-run homer in the sixth off Taylor Buchholz to make it 9-1. A late highlight was the successful major-league debut of Vance Worley, who pitched a 1-2-3 ninth inning and recorded a strikeout. He's likely to return to the minors tomorrow to make room for J.A. Happ.

Happ makes his first start since April on Sunday as the Phils seek their fourth straight win. Between the relatively easy win and the quality work of the Phillies radio crew--it's hard to overstate how much better Scott Franzke and Jim Jackson are than TV play by play man Tom McCarthy--this was a relaxing and pleasant a game to follow as the graph below suggests. 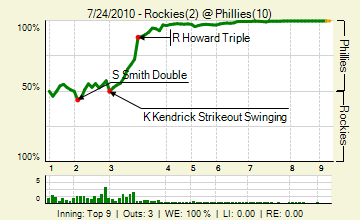