The Phillies swept the Rockies today in another ho-hum mid-day game.

Wait?  That's not the game you watched today?  Did you see another ninth inning in which our closer came so close to blowing the game?  Another game in which Brad Lidge loaded the bases and looked like he was going to implode . . . again?  But somehow pulled it out by inducing a groundout back to the pitcher, just like yesterday's game-ending strike out?

Well, if you've been watching the ninth inning of Phillies' games for the past year, then this really should be considered ho-hum, shouldn't it?  Another win, that's what matters, right?

Three things to note, as the Phillies gain half a game on the idle Braves:

- This is the Phillies first five-game win streak since April 14th, the 8th game of the season.  They haven't won six in a row since September 18 of last year.

- This is the second four-game sweep by the Phillies in the last two weeks (the Reds right before the All-Star break).  Before that, you have to go to mid-May of last year when they swept the Nationals in four games.

- Not counting the post-season, today and yesterday are the first back-to-back saves for Lidge since August 22 and August 23 last year.  In the two games last year, Lidge gave up 1 hit and no walks in 2 innings, while striking out 2.  In these two games, Lidge gave up 4 hits and 4 walks in 2 innings, striking out 3.  For all the sky-is-falling types out there, the Phillies record in both "streaks" was . . . 2-0. 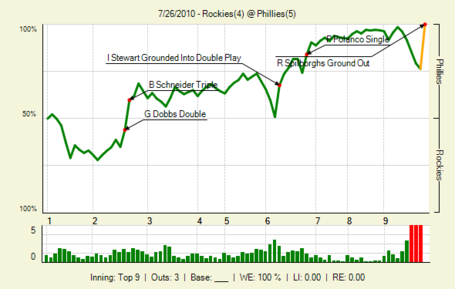