Share All sharing options for: Power ON: Phillies 9, Diamondbacks 5

On a night when Cole Hamels wasn't at his best, the Phils' offense--so often missing in action during Hamels' starts this season--was. Jayson Werth broke his long home run drought with a two-run shot in the fifth, Ryan Howard followed suit an inning later to break a 5-5 tie, and Cody Ransom hit a third two-run bomb in the seventh to put the Phils up 9-5 on the visiting Diamondbacks. That's how it stayed as the team took its season-best sixth straight win and pulled to within 3.5 games of the NL East leading Braves.

Coming off an insane three-start stretch in which he allowed one run in 22.2 innings (and went 1-0 with two no-decisions), Hamels scuffled from the first inning on. After retiring the first two Arizona hitters in the first, he loaded the bases on a single, a hit-by-pitch and walk, then forced in a run by walking slugger Mark Reynolds. After leaving the bases loaded in the first against former teammate Rodrigo Lopez and making two outs on the bases over the next inning-plus, the Phils plated two in the third on a Howard single and a Carlos Ruiz bases-loaded walk. But Reynolds tied it in the top of the fourth on a solo homer, and Arizona took the lead in the fifth on a Stephen Drew single with two outs that scored Adam LaRoche. Hamels left after five innings and 108 pitches.

Werth's two-run shot in the bottom of the inning--his first since June 23--put the Phils up 4-3, but David Herndon couldn't hold Arizona. A double, a walk, and a Howard error loaded the bases, then a LaRoche sacrifice fly and a Miguel Montero groundout each scored a run. It wasn't until the bottom of the sixth, when Shane Victorino scored on a Raul Ibanez two-out single that went under LaRoche's glove and Howard followed with his homer, that the Phils took control. Danys Baez--yes, that Danys Baez--worked a 1-2-3 seventh, and Jose Contreras and Ryan Madson each followed with a scoreless inning to secure the win.

One down note was Victorino leaving the game in the seventh with what early reports pegged as an oblique strain. This probably closes the door on a possible Werth trade--and perhaps with good reason; the streaky outfielder went 2-3 tonight with the homer and two walks, continuing a recent tear on this homestand--and might facilitate the promotion of phenom Domonic Brown, who had two more hits including a triple tonight for AAA Lehigh Valley.

Roy Halladay hopes to keep the train moving tomorrow against Edwin Jackson in a matchup of pitchers who've thrown no-hitters this season. 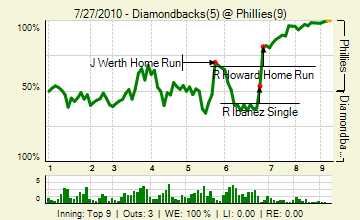