While there may not have been a lot of oxygen left in the hype chamber for tonight's Phillies game, it was still a big one -- the Braves, Cardinals, and Giants all lost, and if the Phillies could pull off their eighth win in a row, they'd draw within 2.5 games of the NL East lead, and 1.5 games behind the Giants for the lead position in the NL Wild Card race.

So when Kyle Kendrick pitched an outstanding game, it was sort of deflating that the Phillies' bats went silent for most of the night.  After a Carlos Ruiz RBI double in the fifth, and a line-drive home run from red-hot Raul Ibanez, the Phillies took a 2-1 lead into the ninth.  And surprisingly, no sign of Brad Lidge.  And, par for the course, relievers Ryan Madson and J.C. Romero allowed the Diamondbacks to tie the game.  But it could have been a lot worse, as the Phillies avoided more damage thanks to a brilliant play by Wilson Valdez on a ground ball for the first out, and a terrific turn and throw on a double play to end the ninth.

So while Valdez saved the game in the ninth, he won it in the eleventh.  After Brad Lidge and Jose Contreras pitched a pair of hitless frames in the 10th and 11th, a Cody Ransom walk and a Carlos Ruiz single set things up for the shortstop, who already had two hits on the evening.  Then, a line drive into the left center gap, and the Phillies locked down their second consecutive sweep and eighth victory in a row.

Tune in tomorrow night for Roy the Oswalt! 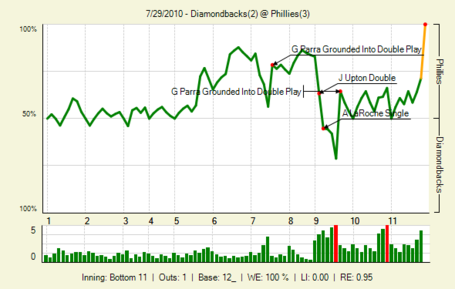