Share All sharing options for: Well That Sucked - Nationals 8, Phillies 1

Not exactly the same as Cliff Lee's first outing for the Phils.  And to add insult to injury . . . this.

The evening got off to an ominous start when leadoff hitter Nyjer Morgan stroked the first pitch he saw into right field for a triple.  He would score on an RBI groundout.  The Nationals would tack on another run in the third thanks to some poor defense... Greg Dobbs forgetting to cover third base on a ball bunted two feet in front of the plate, that catcher Carlos Ruiz airmailed into left field.

The Phillies offense was even more dreadful, with its sole run coming on a Jayson Werth solo home run in the top of the seventh.  The Phillies only collected five more hits all night. 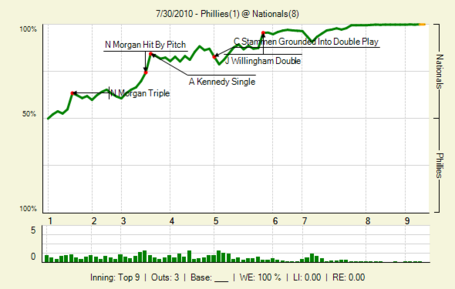