The Phillies brought with them to D.C. an 8 game win streak and a shiny new number 1a starting pitcher.  They were playing a 5th place team that was 14 games under .500.

Tonight, in the second game, they fought back from a 4-1 deficit to take a 5-4 lead in the top of the ninth inning on Carlos Ruiz's third hit and second RBI of the night.

Naturally, they lost both games.

Last night, Roy Oswalt's shaky performance backed by Greg Dobbs' horrible defense did them in.  Tonight, it was Joe Blanton's rocky start and Brad Lidge's even rockier end that cooked them.

Tomorrow, Cole Hamels takes the mound against Phillies arch-enemy John Lannan.  The Phillies hope to salvage the series and prevent the Nationals from having their first three-game win streak since early June.

WARNING: The Fangraph win probability graph below is not for the weak of heart.... 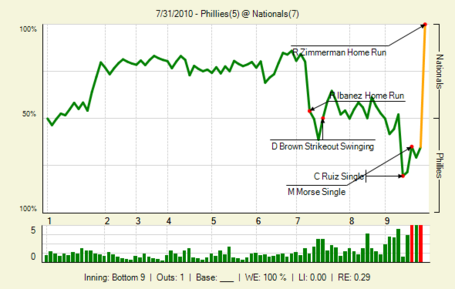