Oh Guys This Season is Going So Well!: Pirates 8, Phillies 5

Share All sharing options for: Oh Guys This Season is Going So Well!: Pirates 8, Phillies 5

For a game that was as close to a "must-win" against a non-division opponent who won't be competing for a Wild Card spot as one can get, the Phillies truly lost this game in splendid, horrific fashion.

Starter Joe Blanton again ran out of gas in the mid-late innings, cruising after a two run first to shut down the Pirates through the sixth, and with a patch-work Phillies lineup doing yeoman's work against Pirates' starter Jeff Karstens, things looked pretty good as the Phils took a 5-2 lead into the seventh on 19th string catcher Dane Sardinha's third homer of the season.

Pittsburgh plattered six runs in the bottom of the seventh, starting with a solo bomb from Pedro Alvarez - his second in two games - and chased Blanton with one out and two runners on.  Reliever Jose Contreras, "struggling" of late (i.e., regressing to the mean), allowed three runs to score on hits by Delwyn Young and Jose Tabata.  Mike Zagurski, relieving Contreras, allowed the final two runs on a Garrett Jones single, making the score 8-5 and putting the cap on a horrendous meltdown.

And, being the 2010 Phillies, the offense did zilch in the late innings, with Sardinha's home run leading off the seventh constituting the team's final baserunner of the afternoon.

I hope you did something more fun than watch this game this afternoon.  Like a nice game of "Getting Kicked in the Taint with a Steel-Toed Boot."

The Phillies travel home to Citizens Bank Park tomorrow, where a three game series with the Atlanta Braves, who have an opportunity to put a stake in the heart of this undead Philadelphia squad, awaits.

Crappiest Fangraphs WE Chart Ever. 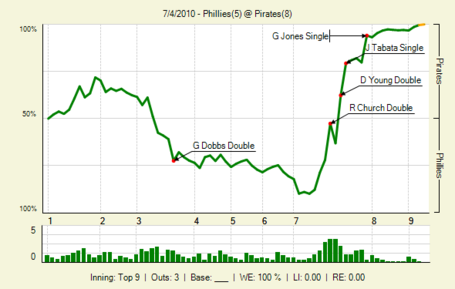