A Thing of Beauty: Phillies 3, Braves 1

Share All sharing options for: A Thing of Beauty: Phillies 3, Braves 1

When the Phillies acquired Roy Halladay, tonight is what they dreamed of.  With the team in a tailspin and starting a three game series against the division leader, Halladay pitched an absolute beauty.  He needed only 93 pitches to finish off the Braves.  The only blemish on his otherwise incredible scorecard was a first inning home run by Chipper Jones, the only Brave to ever score or drive in a run against Halladay (now two solo home runs).

Derek Lowe looked for a while like he was going to better Halladay, as he took a shutout into the sixth.  However, a two-run home run by Greg Dobbs, his first since late April, sealed the victory.  With a 2-1 lead, Halladay made the Braves feel as if they were down by 100 instead of just 1.  Juan Castro put the icing on the cake with a 2-out RBI single in the bottom of the eighth.  At that point, the Braves might as well have just forfeited.

One last point: another great night for Cerberus, as all three runs were driven in by fill-in third basemen.  I'll have a summary of Cerberus again tomorrow, and I'll predict this much - it's not going to be pretty for Utley, Polanco, and Ruiz.  (The flipside of that good news is what the hell is wrong with the regulars in the lineup?!) 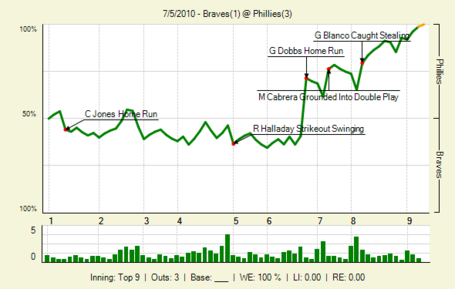