Share All sharing options for: Screaming for Vengeance: Braves 6, Phillies 3 (11)

It was borderline miraculous that the Phillies stayed in this game as long as they did.  Despite collecting just three hits on the night, and two during the first nine innings, the Phillies hung in behind a workmanlike performance by Cole Hamels, plating three runs and sending the game to extra innings, where two famous Phillies' victims got their just desserts.

After loading the bases in the top of the first, Hamels allowed just a single run on a double play groundout by Troy Glaus.  The Phillies scored their first two runs on a two-run homer by Raul Ibanez in the bottom of the first inning.  Atlanta took a 3-2 lead in the top of the seventh on a line drive home run by Martin Prado.  Hamels finished the night with three runs allowed in seven innings, with eight strikeouts, eight hits, and two walks.

The Phillies' second hit, an RBI triple by Ryan Howard with no outs in the bottom of the seventh, looked like the start of a rally.  But, as is the custom these days, the punchless Phillies stranded Howard at third.  The Phillies didn't score again.

The patchwork bullpen blew things apart in the top of the eleventh.  David Herndon, after allowing a leadoff single to Yunel Escobar, coughed up an RBI Phillie killer Matt Diaz.  The game was then put out of reach by 2008 World Series final out Eric Hinske, who hit a two run bomb off Mike Zagurski, giving the Braves a 6-3, one that would hold as Billy Wagner recorded his 18th save of the season in the bottom of the inning off his old mates.

The Phillies try to secure a series victory tomorrow behind Jamie Moyer. 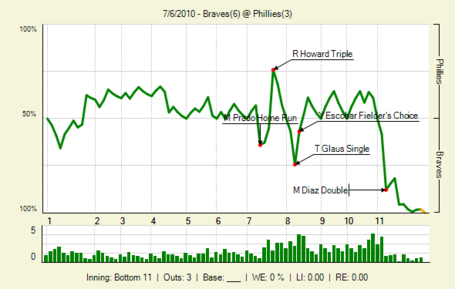