Earlier in the season, I wrote about Jamie Moyer and the two disastrous that were ruining his otherwise great performance.  I wrote about it to show how amazing the 47-year old had been so far.  Little did I know that the trend would continue.  After I wrote that piece, on June 11, he gave up 9 first inning runs to the Boston Red Sox.

And tonight, he did it again.  He gave up a lead off home run and then cruised . . . until the sixth inning.  The wheels fell off at that point.  He got the pitcher to strike out to lead off the inning, and then six straight hits lead to six straight runs.  The culprits were the usual Phillie killers -- Brian McCann and Matt Diaz -- along with this year's addition to the list, Martin Prado.

The Phillies offense tried to overcome the Moyering, but couldn't against a solid Braves bullpen.  Shane Victorino hit a solo home run in the seventh, the bottom of the order bunched together some hits in the eighth to plate another, but they couldn't do anything against old nemesis Billy Wagner in the ninth.

The Phillies are now 6 games out of first for the first time since September 2008.  It doesn't get easier tomorrow, when the division-leading Cincinnati Reds come to town for a four-game set to take us to the All-Star Break. 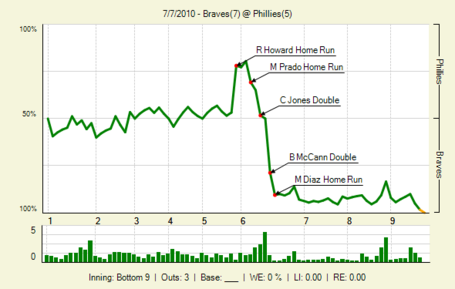