Phillies catcher Brian Schneider goofed up in the 8th inning, but made good on it in the 12th.  In his first game back after a brief injury layoff, Schneider launched a walkoff solo homer in the bottom of the 12th inning to send the Phillies to a 4-3 victory.

In a game that featured some of the weirdest goings-on in recent memory, the first act featured a surprise star: righty starting pitcher Kyle Kendrick, who held the potent Reds lineup to just a single run (on an entirely understandable Joey Votto home run in the 1st) in 6 2/3 innings, striking out four, allowing just three hits and walking nobody.  Yeah, BABIP luck but I'll take it.

The Phillies got on the board in the bottom of the 1st on a Shane Victorino solo home run.  Apparently someone told Shane that he'd better make it up to some of the fans after that regrettable little post-gamer last night...

In the bottom of the 3rd, the Phillies plated their second run in funny/sad fashion.  After a two out walk, Jimmy Rollins scored on an infield single by Shane Victorino, that was thrown away at first base not once, but TWICE, by the tandem of first baseman Votto and pitcher Johnny Cueto.  Including one ballchuck right at Cueto's Johnnies.  He took it like a man though, so more power to him.

The Reds, then, tied it up in the top of the 8th in equally lulz-worthy fashion... a two out, passed ball third strike from Ryan Madson that Brian Schneider couldn't locate, allowing Drew Stubbs to score from second base with no one covering home.

And, well, the Phillies took the lead back in the bottom of the 8th on a sacrifice fly from Rollins, plating Wilson Valdez after a leadoff triple.

Then, Brad Lidge, who looked filthy on Tuesday's loss to Atlanta, made us all make filth in our pants, allowing the Reds to tie the game with two, giving up two hits and a walk in the frame, striking out no one.

The Phillies bullpen held the dangerous Reds lineup at bay, with Jose Contreras and Nelson Figueroa combining for three perfect innings (with a little help from a circus catch by Jayson Werth in the top of the 12th), setting up Schneider's laser shot in the bottom of the inning. 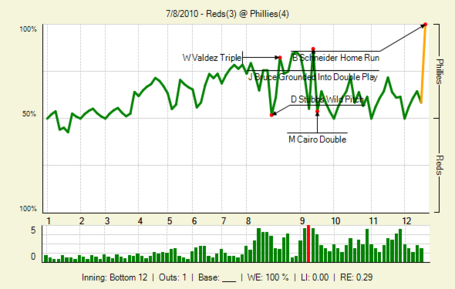