From a lineup already missing disabled all-stars Chase Utley and Shane Victorino, the Phillies subtracted Raul Ibanez, their hottest hitter, before Sunday's game against the Nationals owing to a wrist injury. Two outs into the first inning, they lost slugger Ryan Howard to an ankle sprain on a play at second base; X-rays were negative, but it wouldn't be a surprise to see the Big Piece miss fairly big time. After scoring two runs in that first inning, the Phils went 1 for their next 11 with men in scoring position (and the one hit was an infield single that didn't score a run). They blew a first-and-second, no out opportunity in the fifth, when Nats starter John Lannan set his one-game 2010 season high with three straight strikeouts of the 4-5-6 hitters in the Phillies lineup. (Admittedly, this was Cody Ransom, Ben Francisco and Domonic Brown, but still). They fell behind on a two-run moon shot Adam Dunn hit off Cole Hamels, against whom Dunn had gone 1 for 15 in his career before today.

And yet they won, thanks to some shaky Nationals defense, an overall strong start from Hamels, surprisingly clutch relief pitching and some extra-inning offense. The result, with the Braves losing 2-1 to the Reds, is that the Phils end a difficult weekend that saw Roy Oswalt's underwhelming Phillies debut and Brad Lidge's Saturday night implosion no further behind Atlanta than when they entered it, 2.5 games off the pace in the NL East.

After a ragged outing against Arizona last week, Hamels was sharp again Sunday. He buzzed through the Washington lineup facing the minimum through the first three innings, striking out four. But with a 2-0 lead, he ran into trouble in the fourth by hitting Roger Bernadina, allowing a double to Ian Desmond and, after striking out Dunn, surrendering another double to Saturday night hero Ryan Zimmerman that tied the game. As the Phils failed to crush the eminently crushable Lannan, Hamels gave up a single to Desmond and the Dunn homer in the sixth to put Washington up 4-2. The next half-inning, however, the Phils tied it on a Jimmy Rollins walk, a Polanco double, and, after a Werth foulout and Ross Gload's infield single, a Ben Francisco grounder to Zimmerman at third that looked like a double play before the usually superb defender bobbled it, holding him to one out.

There it stayed through four stressful innings, with J.C. Romero and Ryan Madson handling the eighth and ninth while the Phillies did little against Nationals relievers Joel Peralta and Drew Storen. In the bottom of the tenth, Nyjer Morgan led off against Jose Contreras with a bunt single, moved to second on Bernadina's sacrifice and to third as Willie Harris grounded out. But Contreras struck out Dunn to send the game to the 11th. There, it was Wilson Valdez's turn to bunt for a hit--on a questionable call at first base--advance to second on a pinch-sacrifice bunt by Oswalt and to third on a Rollins flyout. Polanco singled back through the middle to score Valdez, and came around himself on Werth's second double of the afternoon. And in perhaps the least likely conclusion of all, Lidge worked a 1-2-3 bottom of the 11th to secure the victory.

The Phils now enjoy their first off-day since the all-star break, casting anxious eyes toward medical facilities in Philadelphia for word of Howard's condition. 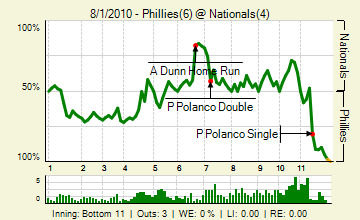