Share All sharing options for: Bad Case of the Runs: Dodgers 15, Phillies 9

So that didn't go too well: after three outstanding starts following his quickie demotion to/recall from the minor leagues, Kyle Kendrick reverted to his Mr. Hyde form Tuesday night against the Dodgers. Kendrick allowed as many baserunners--ten, on eight hits and two walks--as he recorded outs in 3.1 ineffective innings. By the time he left, with men on first and third and one out in the fourth, the Phillies trailed 4-0, and just-recalled Antonio Bastardo quickly surrendered three straight singles to add two more runs to Kendrick's account as well as one of his own.

Down 7-0, the Phils briefly threatened to make a game of it. Domonic Brown got them on the scoreboard in the fourth with a sacrifice fly--his third, against no walks thus far, raising the interesting-to-me-and-maybe-other-geeks question of how long his batting average can stay above his on-base percentage.  An inning later, the Phils chased Vicente Padilla with three more runs, two on a Ross Gload homer (his first of two in the game), to make it 7-4. Padilla got the victory in about as unimpressive form as possible: five innings, six hits, four runs, two walks, two strikeouts.

His fantasy owners no doubt breathed a sigh of relief when LA regained its seven-run cushion by pushing four across in the top of the sixth against David Herndon, who hadn't pitched since July 30. Jay Gibbons hit his first home run since 2007, a two-run shot, to make it 11-4. In the bottom of the inning, Brown notched his first major-league homer, a solo shot; the teams later traded two-spots in the seventh and ninth. Brown finished the scoring by driving in two more with a bases loaded double in the ninth, giving him four RBI on the night. Still trailing by six, with men on second and third and two outs, the Phillies endured the consequences of a roster that now has 13 pitchers and 12 position players; Charlie Manuel had to call on Cole Hamels to pinch-hit, and he flew out to end the game. 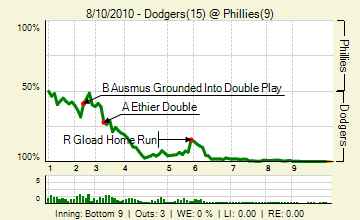