Share All sharing options for: Feat of Arms: Phillies 2, Dodgers 0

If the Phillies are going to make a fourth straight trip to the postseason in 2010, their pitching will have to take them there. After a victorious home debut from newly acquired Roy Oswalt, the prospect seems plausible enough.

The 6-13 record Oswalt lugged into tonight's game despite a 3.50 ERA attests to just how little support he's received in 2010 both before and since coming aboard from the Astros, and another tepid performance from the Phils lineup--two runs on seven hits--didn't change that. Fortunately for all concerned, that was two more runs than Oswalt allowed the visiting Dodgers. Showing a consistent low to mid-90s fastball and a sharp changeup, he held Los Angeles to five hits and two walks over seven innings, striking out five. It wasn't all smooth sailing: after a James Loney double and a Casey Blake walk to start the second, Oswalt needed a double play from Jay Gibbons to escape serious trouble, and he stranded two men in both the third and the fifth. For the most part, though, Oswalt pounded the strike zone and kept the Dodger hitters off balance.

Meanwhile, the Phillies did just enough against Chad Billingsley, loading the bases with one out in the fourth on a single and two walks and pushing a run across on Domonic Brown's fielder's choice. After wasting a Wilson Valdez leadoff triple in the fifth, they got another an inning later when Ross Gload and Raul Ibanez hit back to back doubles to start the inning. Unfortunately, Gload pulled up lame between first and second, leaving the game with what was later reported as a groin strain. He's likely bound for the disabled list, which might be bumping up against some Maximum Occupancy strictures.

Oswalt gave way to Ryan Madson in the eighth. After surrendering a leadoff double to Scott Podsednik, Madson bore down to strike out Ryan Theriot and Andre Ethier, the latter on a full-count changeup that dove out of the zone, before ending the inning by getting Loney to fly out. Brad Lidge was even better in the ninth, showing a nasty assortment of sliders to set down the side in the order--just the fourth time he's done that in his 15 saves this season. 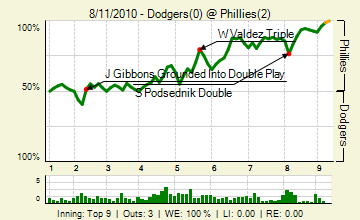