Right around 7:35 pm Eastern Daylight Time, a Phillie crossed the plate for the first time in 38 2/3 innings of play at Citi Field this season when Placido Polanco blooped a single into left field, scoring Roy Halladay. Because Halladay was also pitching, that turned out to be all the Phils would need in shutting out the Mets after four games in Queens in which they were blanked by New York.

The only Met hitter Halladay had particular trouble with was Jose Reyes, who followed up his two-double game against the Doc in Philadelphia last Sunday with a series of tough at-bats tonight. He was retired on a fine play by Mike Sweeney in the first; tripled off the wall to lead off the fourth after Halladay had gone nine up, nine down through the first three innings; lined out to Jayson Werth in the sixth, and struck out after a long battle to end the eighth and probably conclude Halladay's night an inning earlier than he or Charlie Manuel would have liked. The extent to which the Phils' ace dominated the rest of the Mets lineup was on full display after Reyes' leadoff triple in the fourth: he got Angel Pagan to ground out softly to third, then struck out David Wright and Carlos Beltran to protect what was then a 1-0 lead. In all, Halladay held the Mets to four hits and no walks, striking out seven over his eight innings of work.

The Phils got three more runs in the fifth and sixth thanks to shoddy defense behind Mets starter Pat Misch, who pitched relatively well in his 2010 debut. With men on first and second and one out in the fifth, Raul Ibanez hit what looked like a double play to second baseman Ruben Tejada, but Tejada struggled to get it out of his glove and then fired past Reyes into left field, allowing Jimmy Rollins to race around third and score the Phillies' second run. An inning later, with the bases loaded and two outs, Rollins hit a hard grounder directly at Wright--who saw the ball bounce off his foot and squirt into left, allowing Werth and Shane Victorino to score.

Halladay left after eight innings and 113 pitches in favor of Ryan Madson, who proceeded to make things way more interesting than one might have hoped. After striking out Pagan to start the inning, he allowed seeing-eye singles to Wright and Beltran, then worked a full count to Ike Davis before striking him out on a nasty changeup. Madson then got ahead of a very overmatched-looking Fernando Martinez 0-2... and hit him in the back to load the bases for Josh Thole. He too fell behind 0-2, worked the count back even, then swung over another changeup to end the inning. 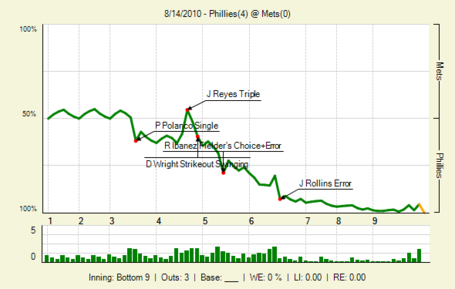