Kyle Kendrick's schizoid tendencies on the mound are well known in these parts, but usually the way it shakes out is that he's good or awful within a given start. In the rubber game of a three-game set against the Mets, though, Kendrick was lousy for the first ten hitters he faced--and then found a serious groove that carried him through his last 4 2/3 innings and lifted the Phillies to a 3-1 win that pulled them into a tie for the NL wild-card lead heading into a series against the Giants in Philadelphia this week.

Kendrick surrendered hits to five of the first ten Mets he faced, and likely would have exited the first inning trailing 1-0 were it not for a probably wrong out call on Jose Reyes attempting to steal second. When Reyes came up again leading off the third, he tied the game with a solo homer high up the right-field fair pole. At that point, Kendrick had thrown close to 50 pitches, and didn't seem at all poised to retire 14 of the next 15 hitters he faced. But that's exactly what happened, with the lone exception a Luis Castillo bunt single in the fifth in which he was clearly in the field of play when he made contact. Working quickly and featuring an inside fastball that ran back over the plate against the lefty hitters who so often pummel him, Kendrick wound up staying in for 6 2/3 frames, holding the Mets to six hits and the lone run while striking out four. He finally exited after walking Castillo in the 7th before facing pinch-hitter Jeff Francoeur. Charlie Manuel called on Chad Durbin, against whom Francoeur was 0-14 over his career; that went to 0-15 following a 400 foot out to center field, and the Phillies maintained their 3-1 lead.

They'd built that advantage on the speed of Jimmy Rollins and Shane Victorino. Rollins created the first run in the top of the third by singling with two outs, stealing second and third off Mets starter Mike Pelfrey, then scoring on Victorino's double just inside the first-base bag. Two innings later, Victorino made his own two-out run with a single and a steal of second before scampering home on Placido Polanco's single up the middle. Jayson Werth stretched the lead to 3-1 in the sixth with a leadoff triple, scoring on a Carlos Ruiz single. Ryan Madson and Brad Lidge finished things up, setting the Mets down without incident in the last two innings.

All in all, a quality offering on the altar of Chase Utley, whose long-awaited yet sooner-than-expected return we hope to celebrate on Tuesday. 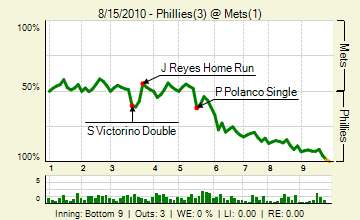