Pat Burrell had his homecoming, a warm round of cheers that died down when he slammed a Roy Oswalt changeup over the left field wall for a solo homer that gave the Giants a 2-0 lead over the Phillies in the first inning. Chase Utley had his, something closer to a roar when he came up in the  bottom of the first, though the fans didn't get the chance to fully emote over the all-star's return as Utley looked not quite ready to roll with no hits in five at-bats.

The eventual stars of the game, though, were the still-newish Oswalt, who shook off that two-run first inning to mostly cruise the rest of the way through his seven innings of six-hit, three-run, seven-strikeout work; and two players a bit ahead of Utley on the road back from the disabled list. Jimmy Rollins had two hits and knocked in three runs, including two runs on a two-out single in the bottom of the fifth that drew the Phils even, and Shane Victorino put them ahead an inning later with a two-run double that drove Barry Zito out of the game.

The Giants drew back within one on a Jose Guillen solo homer in the top of the 7th, but after Ryan Madson worked out of slight trouble an inning later, the Phils put the game away with five runs against the San Francisco bullpen and defense. Victorino started it with a single and a stolen base, Mike Sweeney and Raul Ibanez loaded the bases behind him with a walk and a single respectively, then Carlos Ruiz doubled off the wall in left to score two and chase Giants reliever Chris Ray. After Ross Gload grounded back to pitcher Ramon Ramirez, Rollins came through again with a single through the drawn-in infield that scored Ibanez. Ruiz came home on a Ramirez balk, then moved Rollins to third on a wild pitch; he scored on Mike Fontenot's error fielding an Utley grounder.

Placido Polanco had four hits for the Phillies, including three against Zito that raised his career numbers against the highly paid lefty to 12 hits in 16 at-bats.

Oh yeah: the win moved the Phils a full game ahead of the Giants for the NL wild-care lead. 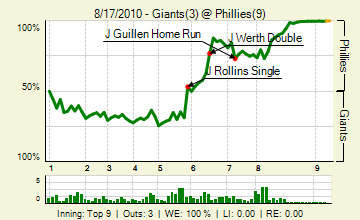