For better or for worse, complaining is an essential facet of our humanity. It can be exhausting. It can be therapeutic. On rare occasions it can even precipitate change. Whatever it is, people love to kvetch. Every once in a while though, it is nice to not have anything to complain about. Tonight was one of those nights.

With Cole Hamels long ago having "returned to form" as an ace (some would say he never left), Joe Blanton has become Phillies fans' whipping-boy du jour. Indeed, if one had paid attention only to the pre-game predictions of your average Phillies fan, one might have been led to believe that the Phillies were big underdogs coming into tonight's game owing to an unfavorable pitching matchup. Sure, it is understandable how on the surface Blanton's ugly 5.69 ERA and Giants starter Matt Cain's sterling 3.11 ERA could lead one to believe this. If one ventures a little deeper, however, and looks at the things that we know pitchers are actually able to control, these two pitchers would appear much more evenly-matched. And guess what? They were!

As we are by now well aware, Blanton's starts tend to follow a general pattern: runs early and runs late. After Giants center fielder Andres Torres led off the game with a towering second-deck home run on a fastball right down Broad Street and Buster Posey followed promptly with a single up the middle, it appeared that not only would the pattern hold, but that Joe would be in for another rough outing in a season chock full of them. Blanton worked out of trouble, of course, and from that point on Phillies fans had very little to complain about. Blanton cruised through the middle innings, pitching around a few singles, and surrendered only a solo bomb to Phillies legend Pat Burrell in the 6th for the Giants' final run of the evening. After a pair of 1-out singles in the 7th, Joe made way for Chad Durbin who promptly induced a double play ball to end the threat. Those were the Giants' last baserunners of the night. All in all, it was a solid (at times dominant), meltdown-free outing for Blanton (6.1 IP, 2 ER, 7 K, 0 BB).

Meanwhile, the offense followed last night's nine-run showing with eight more tonight, beating up on Matt Cain and the Giants' bullpen. Jimmy Rollins, whose first pitch pop-outs have often fueled our carping, was beyond reproach tonight. First, he led off the 3rd inning with a triple and was driven in on a Chase Utley groundout to tie the score at 1. Then, in the 4th, after Carlos Ruiz singled to give the Phillies a 2-1 lead, Rollins broke the team's week-long homerless drought and broke the game wide open with a three-run shot to right. And that was basically that. The Phillies added two more runs in the 7th and one in the 8th when highly-touted, rarely-used pinch hitting prospect Domonic Brown launched a solo shot well into the second deck in right field. Brown's homer also gave Jimmy one last crack at getting a double to complete the cycle but he grounded out to first to end the inning. C'est la vie. You won't hear me grousing about this fantasytastic line: 3 for 5, HR, 2 SB, 3 RBI. With 8 runs on 11 hits with 2 doubles, 3 triples, and 2 homers, tonight was definitely a good night.

With another last-AB victory, the Braves kept their division lead at 2.5 games--you may complain about that if you please. Nevertheless, the Phillies now hold a 2 game lead in the Wild Card as they look to close out the sweep tomorrow behind Cole Hamels. 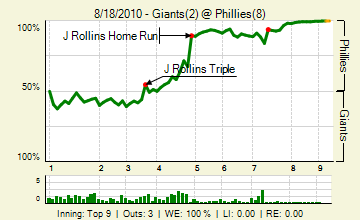