No run support for Cole Hamels has been a running theme the last few weeks.  On this night, however, Hamels needed more than just a token showing of offensive support.  The left-hander scuffled, allowing three runs in the first inning, and five runs total on seven hits over five innings pitched, as the Phillies fell to the Giants and Jonathan Sanchez by a score of 5-2.

It looked even worse through eight innings, with the Giants' lefty holding the Phillies to a single hit before the start of the ninth.  But after a leadoff single by Shane Victorino, and running a 2-0 count on Placido Polanco, manager Bruce Bochy yanked Sanchez in favor of Sergio Romo, who gave up two hits of his own, including a two run double by Mike Sweeney.  Closer Brian Wilson was brought in for the one out, three run "Save."

Get 'em next time. 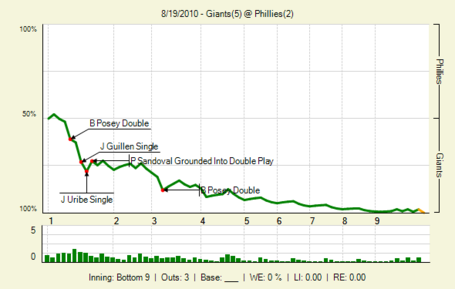