The way the Phillies' offense has functioned for most of the 2010 season, we ought to be getting used to games like this.  Thank goodness for Roy Halladay.

On a night where he "struggled" with his command, issuing a season-high three walks, Halladay still shut the Nationals out for seven innings, striking out five and allowing eight hits.  He pitched out of a serious jam in the first inning; after allowing a leadoff double to Nyjer Morgan, who advanced to third on a balk, Halladay proceeded to load the bases on walks before coaxing a double play ground ball from Ron Bernadina.

The Phillies, for their part, were flummoxed by Jason Marquis.  Yeah, that guy, with the 3 billion ERA coming into the game.  The only run scored came in the bottom of the third, on an RBI double off the glove of Adam Dunn that any reasonably competent first baseman could have fielded cleanly.

Ryan Madson and Brad Lidge pitched a scoreless eighth and ninth inning, respectively, to lock down the win, despite some dramatics in the form of a two-out double from Ian Desmond in the ninth.

Alright guys, you got your lousy hitting night out of the way. 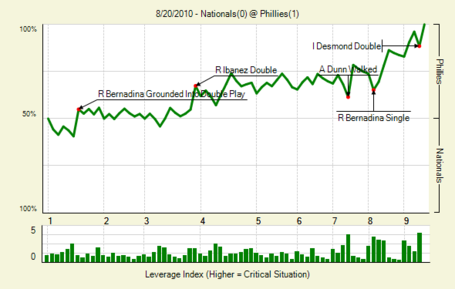