In the landscape of baseball history, Saturday's outcome might turn out to be a footnote, obscured by the injury suffered by Nationals' phenom Stephen Strasburg in the bottom of the fifth inning.  Immediately after throwing a changeup to Domonic Brown, the righthander winced and shook his arm.  Training staff immediately went to the mound, and despite Strasburg's pleas to remain in the game, sent him to the clubhouse.  He was later diagnosed with a strained flexor tendon.

To that point, Strasburg had been dominant, allowing just two hits and one run with no walks and six strikeouts.  But with the poor overall showing of the Phillies' offense, it appears that his brilliance wasn't even needed: The Phillies only managed two more hits the rest of the night off the Nationals' bullpen.

Phillies' starter Kyle Kendrick struggled from the outset, even struggling at his one true virtue -- low walk rate -- walking three in the first, including a bases loaded walk for the game's first run.  The Nationals would make it 3-0 on a two-RBI single by the elderly Ivan Rodriguez.

Chad Durbin would eventually let the Nationals put the game out of reach in the ninth, on a three run homer by Roger Bernadina.

Tonight was a pretty serious drag of a night, for Phillies fans and for baseball. 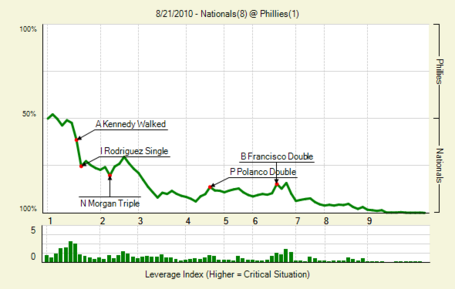