Two starts by guys named Roy, two shutout wins for the Phillies this weekend. Two days after Roy Halladay worked through a series of jams to throw seven scoreless innings at the visiting Nationals in Friday night's 1-0 Phillies win, rotation-mate Roy Oswalt did much the same, albeit with a somewhat bigger margin for error.

Oswalt allowed the leadoff hitter to reach base in each of his first four innings Sunday, stranding runners in scoring position every time. Two of those batters, Nyjer Morgan and Roger Bernadina, stole bases against him in the first and second innings respectively. He had just one 1-2-3 inning, the sixth. On the other hand, he didn't allow any extra-base hits, issued just one walk, and struck out eight on a reasonably economical 106 pitches.

By the time he left, the Phils had a 4-0 lead. Facing longtime nemesis Scott Olsen, they put a quick run up in the first as Jimmy Rollins doubled on the first pitch he saw, moved to third on a Raul Ibanez groundout and scored on a Placido Polanco sac fly. Two innings later, Polanco drove in the Phils' second run with a two-out single to center that plated Oswalt, who had led off the inning with the first of his two hits on the day. In the sixth, they got some breathing room after Olsen intentionally walked Carlos Ruiz to load the bases with two outs, setting up a showdown with Wilson Valdez. The replacement for the resting Chase Utley made the Nationals pay with a two-run single that doubled the lead.

After a rain delay of nearly two hours, Oswalt was gone and the Phils added two more runs on a Raul Ibanez homer. Ryan Madson and J.C. Romero finished things off. With the Cardinals defeating the Giants, the Phils stretched their NL wild-card lead back to two games; as the Braves crushed the Cubs in Chicago today, Atlanta still leads the NL East by 2.5 games. The homestand continues Monday with the Houston Astros coming to town for a four game set, as Brett Myers and J.A. Happ both are scheduled to pitch against their old team. 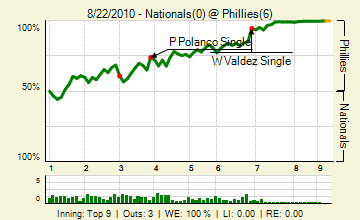