The top of the eighth inning of tonight's game will be a memorable one, as it saw a close play and a controversial call at first base on a bunt by Michael Bourn, and ultimately determined the outcome of the game.

Leading off the eighth, Bourn dragged a bunt up the first base line.  Ryan Howard fielded it and, attempting to tag Bourn, caused the centerfielder to run out of the baseline.  Howard himself even claims that a successful tag was made.  Nonetheless, umpire Greg Gibson called Bourn safe, and Manager Charlie Manuel was ejected in the ensuing argument.  Bourn would eventually go on to score the tying run with two outs in the eighth on a two run bloop single from Carlos Lee, as the Astros behind Brett Myers defeated the Phillies 3-2.

Phillies starter Joe Blanton was actually terrific, after his now-standard first inning clusterfart.  He allowed a single first inning run, then no more runs in his seven innings pitched.  He struck out a season high nine, and issued no walks.

The Phillies' offensive onslaught came in the third inning, on a Carlos Ruiz solo home run, and an RBI single from Chase Utley.

In one of the more exasperating moments of the game, Jayson Werth was picked off second base after an intentional walk to Carlos Ruiz.  Apparently not paying attention, Werth was caught napping by Astros' catcher Humberto Quintero, who fired the ball to second.  Great stuff.

Ugly, frustrating loss.  But this was the worst pitching matchup in the series.  Salvage possible. 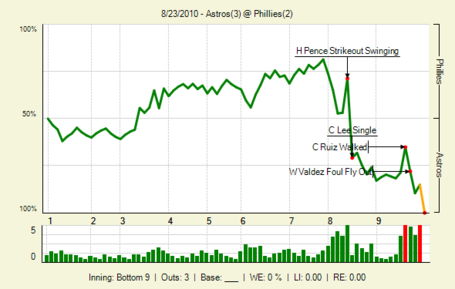