Share All sharing options for: Battle of Attrition: Astros 4, Phillies 2 (16)

This game had everything -- dramatic 9th inning home runs, an ejection, pitchers playing the outfield and outfielders playing first base -- and when all was said and done, and Roy Oswalt had grounded out to end the Phillies' longest game of the 2010, the Fightins' had simply lost a battle of attrition. A cynical Phillies fan might say that an Ed Wade-built team is geared toward winning drawn out affairs of this sort -- he is, after all the world's preeminent collector of middle relievers -- and in truth, the Astros' bullpen was excellent tonight. Fernando Abad and Mark Melancon were particularly impressive, as Houston kept the Phillies off the board during extra innings.

But the Phillies had their chances in extras, and their bullpen was likewise excellent. J.C. Romero, Chad Durbin, Brad Lidge, Jose Contreras, Ryan Madson, and Danys Baez held the Astros at bay from the 8th through the 13th, allowing Jimmy Rollins to send the game into extras via a dramatic 2-out solo shot in the 9th. Later on, David Herndon proved effective in the 14th and 15th before getting BABIP'd in the 16th. Hunter Pence and Chris Johnson both managed infield singles, while a potential double play was snuffed out by Raul Ibanez dropping the ball at first.

The more perceptive among the readership will cry out, "Pray tell, why was left fielder Raul Ibanez playing first base?" The answer is that Ibanez was part of a rather unique defensive shift employed in the top of 15th, necessitated by Ryan Howard's ejection for arguing a checked swing strike call in the bottom of the previous inning. With the bench used up by the bottom of the 13th, and the bullpen similarly exhausted in the top of the 14th, Manuel had only the starting rotation to turn to, and he chose Roy Oswalt to man left while Ibanez donned a first baseman's mitt for the first time since 2005. Naturally, Jason Castro flied out to the erstwhile Astros ace to start off the 15th, and Ibanez topped that by making a diving play to deny Michael Bourn a bunt base hit.

The truly unfortunate thing is that Hamels was again fantastic, and again had nothing to show for it. The southpaw made one mistake pitch to Carlos Lee, a hanging change up that El Caballo deposited into the left field seats, but was otherwise excellent. His final line had him surrendering just 5 hits and a walk while whiffing 8 across 7 frames, and Hamels might even have come out for the 8th if the 2-1 deficit didn't dictate his removal for a pinch hitter. It's now 8 games without a win for Hamels, who certainly deserves more based on the year he's having.

The reason for his cold streak is the Phillies' offense, which has still yet to be jump started by the returns of Chase Utley and Ryan Howard. Howard is just 2-for-19 since his return on Saturday, and took a platinum sombrero (not to mention the ejection) tonight, while Utley is a slightly better, but still not Utley-esque, 7-for-28 since last week. Just need that usual September run to kick in right about now...

The Phils remain 0.5 games ahead of San Francisco for the NL Wild Card, pending the Giants' game with the Reds tonight. With the Braves' loss at Colorado, the Phils remain 2.5 back in the division. 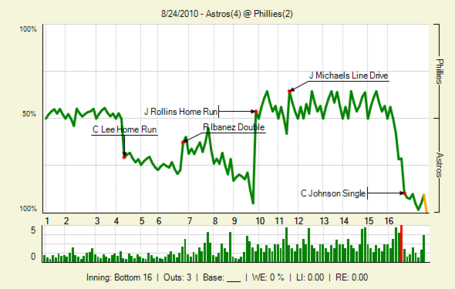