After yet another night of offensive futility, after Brad Lidge crapped all over Roy Oswalt's gem, after it looked for all the world like the Phillies would yet again blow a chance to gain ground in the playoff race, the team scratched out a run in the top of the 12th inning on a great individual effort by Jimmy Rollins, then held on behind the relief pitching of Chad Durbin to claim a desperately needed 3-2 win over the NL West-leading Padres.

Though he was long gone by the end of it, Oswalt was the star of the night. Working off a crackling fastball, he held San Diego to a run and five hits over eight innings, getting hurt only on a solo homer by old Phillies nemesis Yorvit Torrealba in the third. Oswalt struck out six, walked none, and threw only 102 pitches, more than matching the excellent work of Padres ace Mat Latos, who held the Phils to one run over seven innings.

But with the Phillies ahead 2-1 after 8, he was lifted for pinch-hitter Domonic Brown and had to watch as Lidge blew his lead. Pinch-hitter Matt Stairs led off the Padres ninth, hitting one of those grounders to the right side Phillies fans remember well from his 2009 season--but this one slipped through. Stairs exited for pinch-runner Jerry Hairston Jr., who advanced to second on a David Eckstein bunt that Lidge nearly failed to pick up. He induced a groundout from Miguel Tejada, then intentionally walked Adrian Gonzalez and got ahead of Ryan Ludwick 0-2... before hitting him with a pitch to load the bases. Chase Headley came up next, got ahead of Lidge 2-0, saw the count work back to even... and watched in disbelief as Lidge started his windup, then stepped off the mound for a balk. Hairston scored, tying the game at 2.

The teams traded zeroes through the 10th and 11th before Rollins led off the 12th with his third hit of the night, a double to right off rookie reliever Ernesto Frieri. Placido Polanco followed with a single up the middle. As Rollins raced around third, center fielder Luis Durango fired a strike that beat Rollins home, but he slid around Torrealba's tag and slapped the plate as he passed to score the go-ahead run. Durbin, who had worked a scoreless inning in the 11th, stayed in for the 12th and retired the Padres 1-2-3, getting Will Venable on a called third strike to end the game.

With the Braves and Giants having lost earlier, the Phils pulled back within two games of the NL East lead and moved a half-game ahead of San Francisco for the wild-card lead. Joe Blanton opposes Jon Garland as the series continues tomorrow. 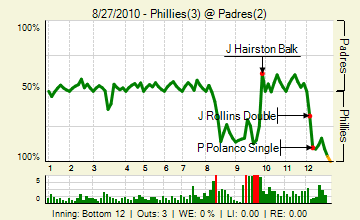