The Phillies didn't hit much on Saturday, but what hits they got were timely. Shane Victorino's fifth-inning single, their first of the afternoon against Padres starter Jon Garland, drove in Jayson Werth to break a scoreless tie, and his triple two frames later scored Werth again to put the Phils ahead for good. Victorino himself came in two batters later on a fielder's choice off the bat of pinch-hitter Mike Sweeney, who barreled down the line to just beat a relay throw that would have completed a double play and ended the inning. (It should be noted that the 37 year-old with chronic back problems then stole second base, his first steal in four years.)  Victorino also threw out Padres catcher Nick Hundley at the plate on a David Eckstein single to end the home fifth and keep the score at 1-1.

The pitching did the rest. Coming off his best start of the season, a no-decision in the opener of the nightmarish Astros series, Blanton turned in another strong outing: six innings, six hits, one run--driven in by Garland--one walk, three strikeouts. He threw only 73 pitches, and likely would have continued were it not for the scoring opportunity that presented itself in the seventh, when Sweeney was sent up. Blanton has worked to a 3.54 ERA in his nine starts since the all-star break, lowering his ERA from 6.41 to 5.15.

Jose Contreras, Ryan Madson and Brad Lidge each worked a 1-2-3 scoreless inning with a strikeout to finish things off. The Phils will look to continue their success at Petco Park (17-4 all-time) tomorrow behind SD-area homeboy Cole Hamels, to whom three runs in a single game probably seems like an embarrassment of offensive riches. 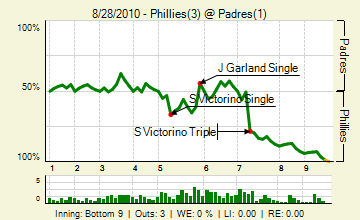