The last time Cole Hamels had enjoyed a lead while he was in a game was four weeks ago today, when the Phillies scored two runs in the top of the first against the Nationals. That was it runs-wise until the seventh, when they scored two more to erase a 4-2 deficit and take Hamels off the hook, ultimately winning 6-4 in 11 innings. Then came consecutive 1-0 defeats to the Mets, during which games Hamels threw 15 innings, allowed two runs on 11 hits and two walks, struck out 19, and took two defeats. On Aug. 19 against the Giants, presumably figuring "what the hell," he allowed five runs in five innings to snap a string of nine straight quality starts... exactly one of which he'd won.

So Hamels must have viewed Sunday's outburst of one run in the third inning, two in the seventh and one more each in the eighth and ninth with a mix of gratitude, incredulity and whatever the word is for "about f&^*ing time." Whether or not there was any causal relationship, that first run the Phils scored in the third--on a two-out Jimmy Rollins single that brought home Carlos Ruiz, who'd walked, taken second on the first of two throwing errors on the day by Padres starter Clayton Richard, and moved to third on a Hamels groundout--marked a turnaround in Cole's day. Playing against his hometown team, the lefty had thrown 50 pitches through the first two innings, working around some trouble. Over the next six, he threw just 65, allowing one more hit--a third inning single by Adrian Gonzalez--and setting down the last 16 San Diego hitters he faced.

Richard was nearly as good, keeping the game to 1-0 until the seventh, when he walked Jayson Werth after a long battle. Mike Sweeney, starting in place of Ryan Howard, yanked Richard's next pitch down the left-field line, clanking it off the wall beyond left field for his first home run as a Phillie and a 3-0 lead. Two more Padres errors led to another run in the eighth, and Werth hit a solo homer in the ninth to nearly the same spot where Will Venable pulled one back from the stands to deprive Werth of a homer in Friday night's game.

As the Braves rallied for six runs in the last two innings to down the Marlins, the win keeps the Phillies two games back in the NL East. 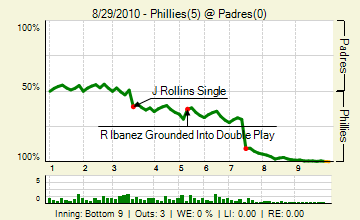