On a day when the Phillies got still more bad medical news with Ryan Howard bound for the disabled list, it fell to the Doctor to ease the pain.

In his first start in Miami since throwing a perfect game against the Marlins in May, Roy Halladay gave the Phils exactly what they needed: seven innings of high-quality, drama-free pitching. Halladay held the Fish to five hits and one run, a solo homer by Dan Uggla in the second inning. He struck out nine and exited after 109 pitches, a fairly low workload by his standards. And as usual, Halladay was devastating with men on base, escaping a first-and-second, one-out spot of trouble in the fourth by inducing a Cody Ross fielder's choice and striking out Mike Stanton and finishing his night by getting a double-play grounder and a flyout after Ross and Stanton singled to begin the seventh.

The Phils got Halladay all the support he would need in the top of the second, when Ben Francisco and Carlos Ruiz--who answered the challenge of batting sixth in the order with a 4 for 5 night--hit back to back homers to left. Halladay helped himself in the top of the fourth with the bases loaded and two outs, when he jumped on a first-pitch offering from Sean West to single off the glove of third baseman Hector Luna and drive in two runs. The Phillies added single runs in the fifth and seventh innings.

Chad Durbin worked the last two innings to finish things off. With the Mets edging the Braves by hanging a ninth-inning run off former teammate Billy Wagner, the Phils have pulled to within two games of the NL East lead. They continue the pursuit in Florida Wednesday night as Kyle Kendrick faces Anibal Sanchez. 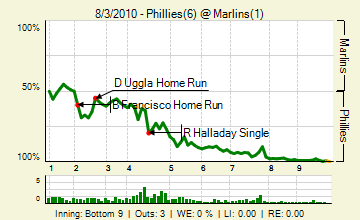