Kyle Kendrick pitched six strong innings, and a still-hot Raul Ibanez paced the offensive attack with two hits, a sacrifice fly, and a walk in five plate appearances, as the Phillies jumped on Marlins starter Anibal Sanchez en route to a 7-2 victory.

Kendrick allowed two runs in six innings, striking out five and walking no one.  There were a few close calls, however, including right fielder Domonic Brown throwing out the tying run at home plate in the bottom of the third inning, and Jimmy Rollins catching a screaming line drive for the third out with runners on second and third in the bottom of the fifth inning, preserving the Phillies then 4-2 lead.

The Phillies would plate two insurance runs in the ninth, with help from Dan Uggla, who botched a throw on a dead double play ground ball off the bat off Brown.

Jayson Werth's struggles continued, as he struck out three times with one hit (a broken bat dribbler to left) in five at-bats.

This is the Phillies' first road series victory since their trip to Yankee Stadium in June.  Ya, really. 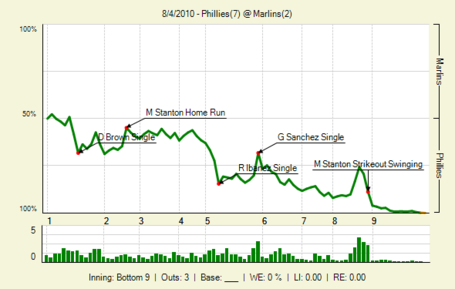