In English class, in essay writing, you know how they taught you to pick a thesis -- or central theme -- for your assignment?  I've been tossing four of them around for tonight:

Luckily the Phillies prevailed, so I'm going to touch on all of them.

For most of the night, all those hits resulted in very few runs.  The Phillies stranded the bases loaded in the first, and five overall baserunners in the first three innings without scoring a single run, against Marlins starter Chris Volstad.  Phillies starter Roy Oswalt improved greatly on his first Phillies outing, leaving the game with a 2-0 lead in the bottom of the seventh but with two runners left on base.  But, not terribly surprisingly, the bullpen coughed it up, with J.C. Romero surrendering a ground rule double to put runners on second and third with one out.  And then, what do we do next?  Walk the bases loaded, and let J.C. Romero -- with his 7.4 BB/9 walk rate -- pitch with the bases loaded.  And the result, naturally, boom!  Walk in the run, tie the game.  After Jose Contreras allowed a bloop RBI single to Gaby Sanchez, the score went to 4-2 in favor of the Marlins, and things looked bleak.

But fortune smiled on the Phillies for once.  After a throwing error in the top of the ninth allowed Placido Polanco to reach first base leading off the inning, Ross Gload reached on a single, later advancing to third with no outs on a Raul Ibanez double that made the score 4-3.  Jayson Werth tied the game on an RBI single, and then things got ugly.  The Phillies proceeded to produce THREE outs in the ninth on the basepaths, with Ibanez thrown out on his way to the plate on a Domonic Brown grounder, Jayson Werth dumbly picked off second base, and Brown caught stealing to end the inning.

With the score tied 4-4, the Marlins threatened after Ryan Madson hit Hanley Ramirez with a pitch.  Ramirez then stole second, and looked like he was going to score on a ball up the third base line that was called foul, but appeared on replay to possibly maybe be fair.  To be completely fair (hah!), the ball skipped from foul territory and then took a weird hop back into fair territory.  Tough call, bad break for the Marlins, I guess, but will I complain?  Hell to the naw.  Madson then beared  bore down and completed the inning without incident.

Then... the 10th, and Chooch slammed his solo home run, putting the Phillies up by a run.  Brad Lidge closed the game out with only a Code Yellow Lidge Save (one baserunner, advanced to second with one out, no runs).

Whoop.  Sweep!  Bring on the Mets! 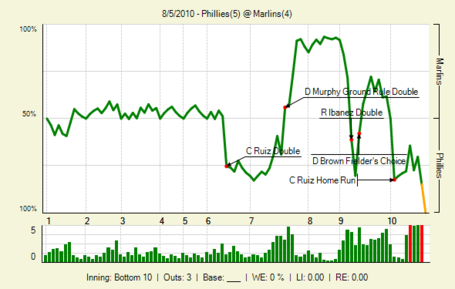