The hallmark of the Phillies offense over their recent run of NL East dominance has been power. Half the 2009 lineup were 30-home run hitters, with slugger Ryan Howard leading the way. But with Howard and Chase Utley both on the shelf, and Jayson Werth and Raul Ibanez both well off their '09 power pace, the team has sought other ways to score lately. In the eighth inning Friday night against the Mets, six Phillies crossed the plate not only without benefit of the long ball, but lacking so much as an extra-base hit.

Five singles to start off the inning, a walk, another single, a sacrifice fly, and one more single did the damage, with new arrival Mike Sweeney registering the first and last of the hits. Trailing 2-1, Sweeney and Jayson Werth were at first and third when Ben Francisco fell behind hard-throwing Mets reliever Bobby Parnell 0-2, fought off a couple pitches foul, then poked a slider into shallow center to tie the game. Carlos Ruiz got ahead of Parnell before knocking a fastball back up the middle to score Werth and put the Phils ahead. With lefty specialist Pedro Feliciano now in for Parnell, Wilson Valdez laid down a bunt to the third base side that David Wright inexplicably retreated on, allowing Valdez to reach and loading the bases. Feliciano--quite possibly confused to find himself facing Phillies hitters other than perennial adversaries Utley and Howard--fell behind Ross Gload 3-0, battled back to work the count full, then threw an inside fastball for ball four and another Phillies run. Jimmy Rollins banged a hard single to left to make it 5-2. After Raul Ibanez struck out and Manny Acosta came in for Feliciano, Placido Polanco hit a deep fly to center that scored Valdez, and Sweeney--who started at first base, batted cleanup, and made a spectacular diving play to end the top of the eighth--finished things off with a hard single to left center and a 7-2 Phillies lead.

Those last two runs proved useful. On to wrap things up, Danys Baez struck out Wright, but allowed a single to Ike Davis. Josh Thole popped out, but Jeff Francoeur dribbled a grounder up the third base line that refused to roll foul, putting two on with two out. With lefty pinch-hitter Chris Carter announced for the Mets, Charlie Manuel called on J.C. Romero to relieve Baez. But Mets skipper Jerry Manuel pulled back Carter in favor of veteran minor-league slugger Mike Hessman, and the journeyman blasted a Romero offering into the right-field seats to bring the Mets within 7-5. Out came Charlie again, this time to bring in Brad Lidge... and the much-doubted closer finished things off by striking out Jesus Feliciano.

Lost in the late drama were a pair of standout starting pitching performances. Joe Blanton had one of his better outings this year for the Phils, allowing two runs on seven hits while striking out four. Jonathon Niese was even better for the Mets, wriggling out of some early jams to hold the Phils to one run on four hits. The young lefty showed a superior curve to complement his cutter, working through early control problems (five walks on the night) to finish seven innings.

Cole Hamels and Johan Santana face off tomorrow night as the Phils go for a lucky thirteenth straight win at home. Now here's the goodness: 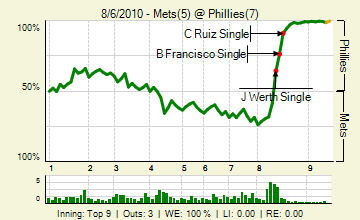