Cole Hamels should be used to it by now. The lefty might not be the unluckiest man in the world--he makes millions of dollars to play a game and has a gorgeous wife and a World Series MVP award to look at if the blues start to get him down--but he might be the unluckiest pitcher of 2010 in terms of exceptional performances not showing up in the win total. Against the Mets Saturday night, Hamels pitched seven innings, gave up six hits and a run, struck out 11... and fell to 7-8 on the season. It was his ninth quality start this year, and sixth since June 7, in which Hamels either took a loss or no-decision. (This doesn't include his seven-inning, ten-strikeout, four-run performance against the Nationals last Sunday in a game the Phils won in 11 innings.)

Worse, the Mets got their one run on a Jeff Francoeur solo homer in the seventh inning, an OFJOAB special that landed in the first row beyond the right-field wall. Francoeur is 8 for 16 in his career against Hamels, probably in part because Cole pretty much only throws strikes--78 of his 99 pitches Saturday were in the zone--and Frenchy swings at everything, as seen when he struck out on a full-count pitch at his eyes with two outs and the bases loaded against Chad Durbin in the eighth.

All that said, the other lefty on the hill tonight, Mets ace Johan Santana, was pretty special himself. Rebounding from the ten-run tattooing the Phils put on him back in May, Santana worked 7 1/3 scoreless innings Saturday, holding the Phils hitless until Placido Polanco singled with two outs in the sixth. Actually, Santana should have been out of the inning without seeing Polanco; he struck out Raul Ibanez a batter earlier, but Henry Blanco failed to corral the pitch, and Ibanez reached first. With two on and two outs, though, Mike Sweeney grounded to short.

The theme of failing to cash in opportunities continued through the next two innings. Jayson Werth led off the seventh with a double, then fulfilled his evident mission to do something inexplicably stupid once a game by getting thrown out at third on Ben Francisco's grounder to short. Two batters later, Wilson Valdez beat out a bunt for a hit, pushing Hamels out of the game in favor of John Mayberry Jr., who flew out to center. The Phils came even closer in the eighth, with Jimmy Rollins and Ibanez starting the inning with singles against a clearly tiring Santana. But Charlie Manuel called on #3 hitter Polanco--he of the .320 average--to lay down a bunt, and Santana jumped on it and threw to third just ahead of Rollins. Mets manager Jerry Manuel then lifted his ace in favor of hyperactive reliever Francisco Rodriguez, who induced a lineout from Sweeney, walked Werth, fell behind pinch-hitter Ross Gload, battled back to 3-2, and finally got a grounder to second to end the inning. Rodriguez came back to work a 1-2-3 ninth, and the Phils' 12 game home win streak was at an end.

With the Braves' 3-0 win over the Giants, the Phillies fall back to two games out of first place. They'll resume the pursuit tomorrow and try to secure a series win over the Mets when Roy Halladay faces knuckleballer R.A. Dickey. 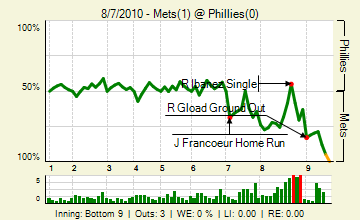