The Abyss Stares Back: Phillies 6, Mets 5

Share All sharing options for: The Abyss Stares Back: Phillies 6, Mets 5

This would have been a tough one to stomach: leading the Mets 6-2, Roy Halladay cruising, an opponent that hadn't won back to back games since June 22-23, is hopeless on the road and has come to the brink of irrelevance in the playoff race. But the Phillies edged right up to that nightmare, as the usually reliable Doc surrendered a run in the sixth and two more in the seventh, the second on Chris Carter's pinch-hit RBI double.

With one out and the lead down to 6-5, Doc pitched around Jose Reyes, who already had two doubles on the day and might have had a triple to go with them were it not for a great defensive play by Ross Gload. Angel Pagan came up with men on first and second, and flied out to center; Halladay then extricated himself by striking out the scuffling Carlos Beltran.

The Phillies offense, having pushed runs across in only two of their previous forty-nine innings against the Mets, roughed up R.A. Dickey early on. Jayson Werth cut a 2-0 deficit in half with a wind-blown solo homer in the second inning. In the third, Jimmy Rollins blooped a double with one out, Reyes bobbled a hard grounder from Placido Polanco, and Gload tied the game with a single to left as Rollins just eluded Josh Thole's tag at home. Raul Ibanez followed with a three-run homer to center that stretched his hitting streak to 15 games and put the Phils up 5-2. Werth then doubled and scored two batters later on Brian Schneider's RBI single.

Halladay, so often superb in defeat this season, was something less than that in victory today. As usual, though, he was able to bear down when trouble loomed. After Reyes doubled to start the sixth and scored on Pagan's single, Halladay struck out Beltran and Wright, then got a groundout from Ike Davis. The Beltran strikeout in the seventh was the end of his afternoon, which saw the Mets put up two-spots in Roy's first and last innings but also featured ten Ks in all, including three of Wright. Ryan Madson worked a 1-2-3 eighth inning, and Brad Lidge bounced back after allowing a leadoff single to Thole by retiring Ruben Tejada, Carter and Reyes to end it.

With the Braves victorious again over the Giants in Atlanta, the Phils remain two games back in the NL East but now trail San Fran by just a half-game in the wild-card standings. After an off-day tomorrow, they'll host the Dodgers for three at home this week. 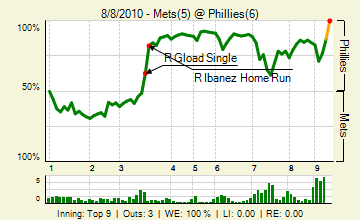