Share All sharing options for: Barrage a Trois: Phillies 8, Dodgers 4

Brian Schneider and Ryan Howard paced the Phillies' offensive attack with a pair of three run homers, and Carlos Ruiz capped off the scoring with a two-RBI single of his bitch, Jonathon Broxton, en route to an 8-4 Phillies victory over the Dodgers.  The Phillies battered former farmhand Carlos Montaserios for five runs on five hits in two plus innings pitched.

Phillies starter Kyle Kendrick showed signs of the same lack of command that defined his previous start, including a walked in run in the first.  Kendrick escaped further damage on a double play ground ball.  Kendrick's night ended after a two run homer by James Loney in the bottom of the 6th inning.  He allowed seven hits and one walk, with no strikeouts, in five full innings pitched.

Howard's home run was his first in over a month, and his first extra base hit since returning from the disabled list.

The Phillies' bullpen turned in another outstanding effort, with Chad Durbin, J.C. Romero, Ryan Madson, and Brad Lidge turning in a combined four innings of one hit, no run relief. 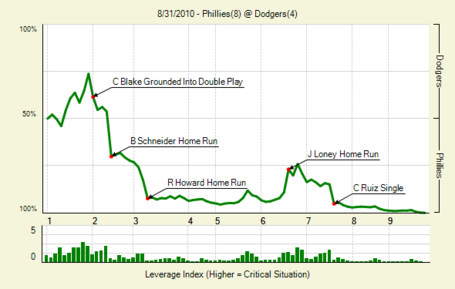