Share All sharing options for: It's Alive! Phillies 5, Dodgers 1

Following the Dodgers one-hit shutout of the Phillies Monday night, things looked bleak.  Even though the Phils had swept the NL-leading Padres over the weekend, they did so without much offensive prowess, scoring 3 runs on only 3 hits Saturday and 5 runs on only 5 hits Sunday.  Monday night's disastrous loss (while the Braves easily beat the Mets) raised the same red flags that the Astros series the week before had raised.

Is this team's offense permanently crippled?  Are the big guys too injured to power this team?  Is what we think is just a prolonged slump really the new reality?

Well, if the last two games are any indication, the answer to all of those questions is a resounding no.  Following last night's 8-4 win, the Phillies pounded out another 10 hits and 5 runs today.  They did so on the strength of early solo homers from Jimmy Rollins and Shane Victorino followed by some clutch hitting later in the game from Chase Utley.

Yes, you read that correctly.  Utley, who had been one of the chief culprits behind the prolonged slump, had a coming out party of sorts today.  He had three doubles, two of which plated runs.  Rollins also had two runs batted in to go along with his three runs scored.  The big guys at the top of the lineup performed today in style.  The 14 team strikeouts on the day?  Well, we can forget about them when the team scores 5 . . .

And when the starting pitcher turns in another gem.  Roy Oswalt walked six thanks to a tight strike zone, but he held the Dodgers to only one hit and no runs through six and a third innings.  The bullpen finished the game out, as J.C. Romero, Ryan Madson, and Brad Lidge combined for two and two-thirds innings of no earned runs.  The only Dodger run scored thanks to a Jimmy Rollins error.

After Monday night's debacle, it's hard to believe that the Phillies could finish up their trip to California 5-1.  They finish up their road trip tomorrow night with a 1 game makeup against Colorado.  Resurgent Joe Blanton takes the mound against Jhoulys Chacin. 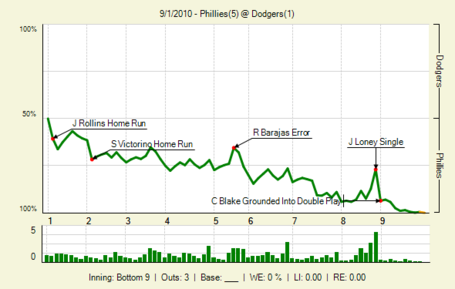