Share All sharing options for: No Cigar: Mets 4, Phillies 3

Kyle Kendrick was decent enough, sure, allowing 2 runs in 5 innings. But his line today belies how poorly he actually pitched. He struggled with his command and surrendered a number of well-struck balls, many of which luckily found his fielder's gloves. In any case, facing a lineup with 7 left-handed hitters, 2 runs over 5 is about the best we could have hoped for from Kendrick.

The offense, meanwhile, was held in check for much of the day. It had been a full 3 games since the Phillies were last shut out at Citi Field and until the 8th inning, it appeared as if this scoring streak was sure to come to an end. The bats could muster mostly nothing against the apparently indomitable BIG PELF. Many bad at bats were had. Several double plays were grounded into. Nary a serious scoring threat was mounted.

Then, in the 8th, a glimmer of hope. With 1 out, Russ Glod doubled and was quickly driven in on a Shane Victorino single, chasing a defiant Pelfrey. His replacement, Bobby Parnell proceeded to allow a base hit to Placido Polanco and a 2-run single to Ryan Howard before striking out Jayson Werth to end the inning. Pinch hitting against replacement closer Hisanori Takahashi with 1 out in the 9th, Mike Sweeney came about 10 feet from tying the game, but was instead forced to settle for a double off the wall. A few weak groundouts later and the game was over.

Aside from the mostly invisible offense, the Phillies' chances were really hurt today by some questionable bullpen management by "accidental genius" Charlie Manuel. With runners on 2nd and 3rd and 2 outs in the bottom of the 7th following a Raul Ibanez misplay in left, Manuel elected to have Jose Contreras intentionally walk the right-handed David Wright and have J.C. Romero face lefty Ike Davis. Of course, as anyone who has watched a Phillies game in the last 2 years could have predicted, Romero quickly ran the count to 3-0 and allowed a 2-run single up the middle on a 3-1 fastball. And that would prove to be the difference. Also seemingly hell-bent on making sure the Phillies' best reliever is shot should the team be fortunate enough to make the playoffs, Manuel called on Ryan Madson with the Phillies trailing by 1 in the 8th. Madson pitched a scoreless frame but, as Ryan Lawrence notes, he has now appeared in the team's last 5 games and 27 of their last 39. At some point Charlie will have to get him some rest. Yesterday or today would have been starts.

With the Braves' 6-3 victory over the Cardinals in extra innings, the Phillies slide back into a tie atop the NL East. Tomorrow, Roy Oswalt faces off against Jon Niese as the Phils try to lock up another series win. 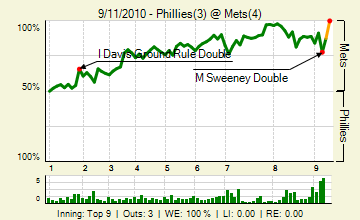