Share All sharing options for: In Play, Run(s): Phillies 11, Marlins 4

Seems like there's nothing the Phillies' hitters like more than having Joe Blanton on the mound.  Once again, the offense came through with the right-hander on the mound, plating 11 runs in support of a very good pitching performance, en route to an 11-4 Phillies victory tonight in South Florida.

It wasn't all positive, as reliever David Herndon turned in another poor performance in what has been an up-and-(mostly) down season for the Rule V kid.  Herndon allowed three runs on three hits (all for extra bases) in his one complete inning of work in the eighth.  Yes, of course he had that rope because of the huge lead his teammates staked him to, but still.  Yecch.

The Braves shut out the Nationals, 4-0, so the Phillies remain one game up in the National League Eastern Division. 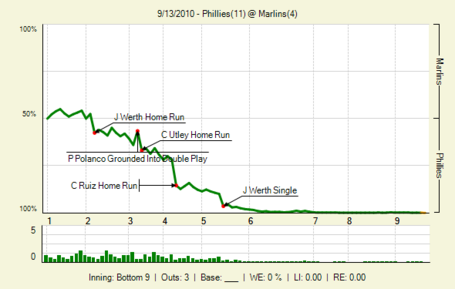