Entering tonight's start, Cole Hamels was riding an impressive 25 inning scoreless streak. With one out in the first, that streak came to an end on a weakly hit RBI single off the bat of Dan Uggla. By the time Cole departed the game with two outs in the 7th, he had started a new scoreless streak--this one 6 1/3 innings.

It's hard to overstate just how dominant Hamels was tonight. Despite struggling with his command a times, the ice cream to the Phillies' ace chipwich (Roy-Cole-Roy, get it?) amassed an incredible 13 strikeouts (11 of them swinging) against only 2 walks in 6.2 innings pitched. In both the 4th and 6th innings he struck out the side. Consider this: 13 of the 20 outs Cole recorded tonight came via the K, which in turn means 7 outs came via balls in play. If Cole gave up 5 base hits tonight, that means the Marlins got hits on 5/12 balls in play--a .416 BABIP! This is why we stat nerds love the strikeout so much; because it can mitigate against a pitcher's occasional bad luck. Cole joined Roy Halladay as the second Phils pitcher with 200+ Ks, breaking his career-high of 196 set in 2008. His fastball, which seemed to have lost a tick during his last appearance--perhaps due to fatigue--sat in the 91-93 mph range all night. Incredibly, Cole used his fastball to record strike three 8 times tonight. Yeah, that's what they mean when they say a pitcher has "a good fastball tonight." The only quibble that can be had is with Cole's pitch count. As is often the case in high-strikeout performances, Cole ran a number of deep counts, particularly in the first 3 innings. He was lifted for Chad Durbin in the bottom of the 7th after throwing 127 pitches.

Of course, with Cole on the mound tonight, it was expected that runs would be hard to come by for the Phillies. The bats flashed a much better approach tonight against rookie righty Adalberto Mendez--who in his first career start held the Phillies to one hit--working 5 walks and chasing him after only 4.2 innings. Still, despite numerous chances (they stranded 12 baserunners on the night) they were only able to plate two runs: the first on a first inning double by Placido Polanco and the second on a Jayson Werth RBI groundout in the fifth. Luckily, that would prove to be enough for Cole. Madson and Lidge, our once again formidable 1-2 punch out of the bullpen, worked scoreless 8th and 9th innings, respectively. Game. Set. Match.

Meanwhile, in Atlanta, the Barves fell 6-0 to the Nationals, fueled by homers from Adam Dunn and...Livan Hernandez. LOL. The Phils move a full two games up on Atlanta in the NL East. Tomorrow, Roy Halladay tries to make it a sweep and attempts to throw his second perfect game of the season in the Marlins' stadium, whatever it's called today. 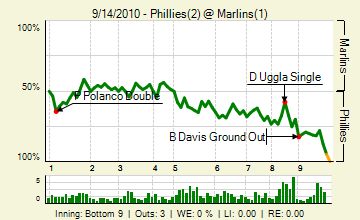