He has had prettier games, but with the help of his lineup, Roy Halladay was good enough to win his 19th game tonight as the Phillies wrapped up a three game sweep of the Marlins in Florida.

In the ninth, and in a non-save situation, Brad Lidge picked a good night to struggle with his command.  The closer walked three in just a third of an inning, including a bases loaded walk that resulted in the Marlins' fifth run.  Jose Contreras replaced Lidge and quickly retired the last two hitters of the game for the "Save."

With the Braves' loss this afternoon against the Nationals, the Phillies now sit three games ahead in the National League East. 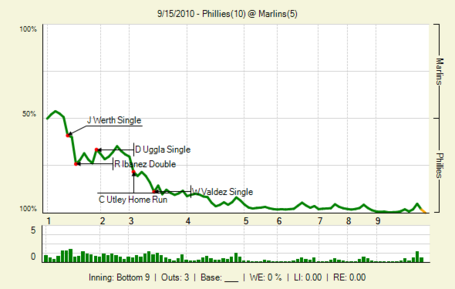