Share All sharing options for: Play the Game: Phillies 9, Nationals 1

Roy Oswalt twirled six strong innings, and the Phillies offense exploded for six runs in the first off Nationals' starter Jason Marquis, en route to a 9-1 Phillies victory over the Washington Nationals.

The Nationals scored their sole run in the top of the first off Oswalt, who took command from that point on, scattering six hits and a walk over six innings, striking out seven.

The tone of the game was set in the first inning, as shortstop Wilson Valdez came to the plate with the bases loaded and one out, and the Phillies leading 3-1.  When he hit a hard grounder toward the middle of the diamond, it looked like a sure double play (surprise!), until the ball struck umpire Tim Tschida, and deflected into the outfield.  Instead of ending the inning with a 3-1 score, the score sat at 4-1, with just one out.

Jayson Werth added a solo home run in the fifth inning, and Carlos Ruiz jumped on board for a two run bomb in the bottom of the eighth. 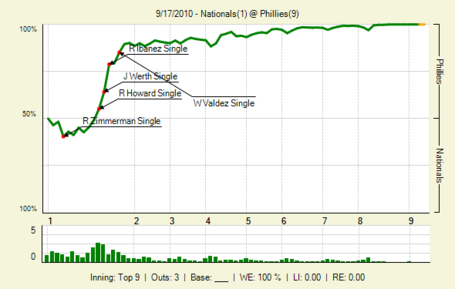