On a beautiful night in South Philadelphia when the Phillies celebrated German Heritage Night, no better metaphor than the old heavy weaponry of the Krupp family serves to describe Phillies Kraftwerker Ryan Howard, whose third inning home run vaulted him past Pat Burrell into third place on the Phillies all-time career home run list with 252, just seven behind Del Ennis (beyond that, the long slog to surpass Mike Schmidt at 548).

Equally impressive is that it was the 30th home run Howard hit this season, setting a franchise record for Howard of five consecutive 30 home run, 100 RBI seasons. Factor in a year when Howard's power has been off a bit (it's the Year of the Pitcher, haven't you heard? I'm right, you know that?) and he's been on the DL for a stretch this season, and it's a noteable accomplishment. Volk, this is about as powerful as a  power hitter gets. Ein großes Stück indeed.

At the start, however, the game felt more like the League of Nations responding to the Italian invasion of Ethiopia than anything all that German. Phillies starter Kyle Kendrick resurfaced on an evening after the Braves won in New York and promptly used 29 pitches to get out of the first inning, giving up a run in the process. But Nationals starter Jordan Zimmerman responded in kind with a similar inning in the second, when Jayson Werth homered to tie the game. After allowing singles to Raul Ibanez and Carlos Ruiz, Wilson "The People's Sub" Valdez hit a go-ahead double (with a slight limp into second; he stayed in the game).

The Phillies offense got on its Bismarckian timetable in the third, as Howard's 2-run homer was followed by a solo HR by Raul Ibanez that put the Phillies up 5-1. Kendrick allowed another Nationals run in the sixth, but finished the inning with a quality start, one walk, three strikeouts, and, as it turns out, the win. So saug es, haters, Kyle Kendrick is a winning pitcher (WIP'd myself there). Bullpenners Chad Durbin, Ryan Madson, and Brad Lidge finished the game, although Madson's eighth inning was not without drama, as he had to strike out Willie Harris with the bases loaded to keep the score where it was.

Madson must have swapped look-alike masks with Brad Lidge. Convinced that the inevitable 21-pitch 9th inning was on its way, the pre-emptive potty break I took with my boys was almost too long, as we returned to our seats just in time to watch the final out.

There, now I've included a reference to the bathroom in my German'd up game recap, so it's echt Deutsch. 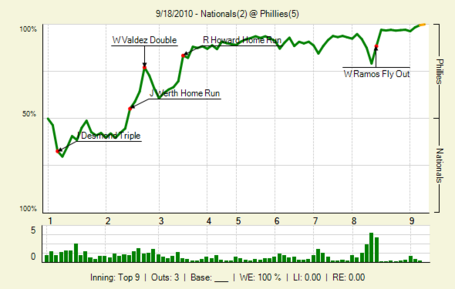