Be resolute, fear no sacrifice and surmount every difficulty to win victory: Phillies 7, Nationals 6

Share All sharing options for: Be resolute, fear no sacrifice and surmount every difficulty to win victory: Phillies 7, Nationals 6

By the 9th inning of today's game, most Phillies fans had probably come to grips with the likelihood that the team would enter this week's pivotal three game series against the Braves with only a two game lead in the division. Earlier, the Braves wrapped up a sweep of the hapless Mets with a 6-3 victory, and with the Phillies bats quiet for most of the afternoon, it seemed like the Nationals' 6-3 lead would hold. Wrong. Again.

But before we get to the good stuff, lets talk about the bad stuff. For 5 innings, Chairman Joe Blanton was excellent--striking out 8, walking 0, and allowing only 1 earned run. But you'd think, by the last month of the regular season, Charlie Manuel would have realized that Joe Blanton tends to tire and, in turn, become ineffective as his pitch count nears 100. With this in mind, and with Blanton's pitch count over 80 entering the 6th inning, it probably would have been smart to have arms warming in the bullpen to enter the game at the first sign of trouble. But no, as has happened too often this season, Charlie's failure to understand Blanton's limitations resulted in Blanton being hung out there to dry. Despite signs that he was losing his command, Joe was left in the game with two on and two outs to face Mike Morse who worked a good at bat and launched a 3-2 batting practice fastball over the right field wall to turn a 3-1 Phillies lead into a 4-3 deficit. And the fun didn't end there. With Manuel's recent bullpen strategy of using his best relievers in low-leverage situations having the expected side effect of rendering Ryan Madson and Chad Durbin unavailable to pitch in a close game, he was forced to use Danys Baez and J.C. Romero in a game the Phillies were trailing by fewer than three runs. Naturally, the Nats tacked on runs in the 7th and 8th innings to run the score to 6-3.

Although they were able to tag Nationals starter Yunesky Maya for 3 runs and chase him after only 4.2 innings pitched, the Phils failed on several occasions to extend their lead (stranding 10 runners total) and were kept at bay by the Nationals bullpen from the 6th through 8th innings. But as we all know by now, the cliche "We play all 27 outs" has become something of a motto for this team. As things turned out, they would only need 24 outs today. Facing the meat of the Phillies order in the bottom of the 9th, Drew Storen wasted no time putting runners on 2nd and 3rd with no outs as Polanco singled and Utley followed with a double down the left field line. Ryan Howard proceeded to drive them in on a line drive single to center, bringing the Phillies within one, still with no outs. Then, up stepped the much-maligned-by-people-who-don't-know-anything-about-baseball Jayson Werth. Already with two hits on the day, Werth worked a full count and fouled several fastballs straight back before finally squaring one up and crushing it out of the deepest part of the ballpark in center field giving the Phillies another comeback, walkoff win, 7-6. Goddamn, this team is fun.

With the win, the Phils remain three games up on the Braves. Cole Hamels faces Jair Jurrjens tomorrow. Who's excited? 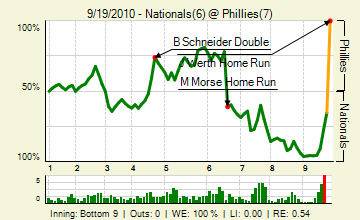