Share All sharing options for: By Numbers: Phillies 5, Braves 3

Phillies righthander Roy Halladay became the first Phillies pitcher to win 20 games since Hall of Famer Steve Carlton accomplished the feat in 1982.  Even if you don't believe in the pitcher Wins stat, it's still a pretty awesome accomplishment, and speaks to just how amazingly well Halladay has done this season.  In doing so, he lowered the Phillies' magic number to claim the National League East Championship to six.

Halladay has certainly pitched better, however.  He surrendered seven hits and walked two in seven innings, striking out only three and allowing three runs, including a monster first career home run to thorn-in-our-side-for-the-rest-of-the-decade Freddie Freeman.

All of the Phillies' scoring came on two plays: A huge three run home run from Jayson Werth in the bottom of the third, and a two run, two out double from Raul Ibanez in the bottom of the sixth.  There were baserunners galore -- they left 12 on base -- but at this point, hey, wins are wins.

Ryan Madson and Brad Lidge, once again, closed out the game with two scoreless innings of relief.

The Phillies go for the sweep tomorrow behind Roy Oswalt. 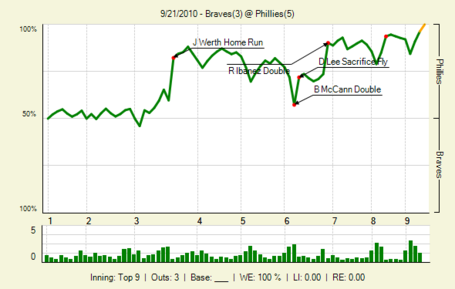