You Get NOTHING!: Phillies 1, Braves 0

Share All sharing options for: You Get NOTHING!: Phillies 1, Braves 0

Tommy Hanson and Roy Oswalt matched each other through six scoreless innings, with Oswalt allowing just a single hit and one walk and striking out eight through seven.  Hanson allowed two hits in six but walked three.
The sole run in the game scored in the bottom of the eighth, on an RBI double by Raul Ibanez off Jonny Venters that juuuuuuuuusst barely plunked the left field line, scoring Jayson Werth from first after a two out walk.  That's two nights in a row that Ibanez has knocked in late inning, game winning runs with two outs.  My man is clutch.
Not much else to say here, except that Roy Oswalt is just awesome.  I mean, really.  The July deal with Houston might go down as the greatest trade deadline acquisition ever.

With the victory, the Phillies go up six games on the Braves with nine to play, reducing their magic number to four.
Life is good. 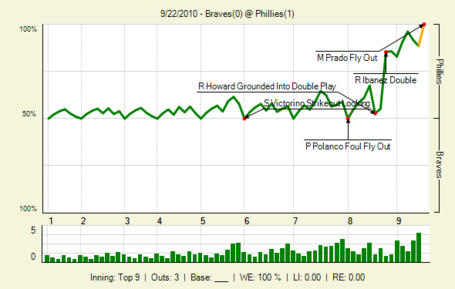